For Marvel movie fans it’s Thor overload time, with our set visit embargoes lifting a few weeks ago, the press junket taking place last week (we were invited!) and it opening in theaters across the UK next week.

But as one movie opens, there’s always another right around the corner from Marvel Studios and the official marketing push for Captain America: The Winter Soldier begins now with this new poster featuring the shield and backside of Steve Rogers (Chris Evans) in his new Cap duds.

Note the Helicarrier in the background. It crashes and burns in the film but there might be more than one – it’s hard to remember from the impressive footage we saw at Comic-Con this summer. In fact, alongside Guardians of the Galaxy, it was the most impressive footage I’ve seen from a Marvel Studios film early at Comic-Con in my years of attending. 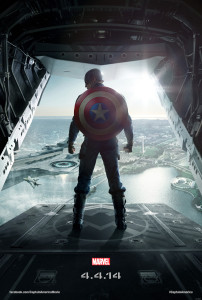 [Update] The trailer is now out and it takes a lot of bits from the footage that played at Comic-Con, notably the elevator and crashing Helicarrier sequences. As someone who didn’t love Captain America: The First Avenger, this trailer is incredible and is more exciting than Thor: The Dark World’s marketing. And to thing, Guardians of the Galaxy will even top this with its first trailer…

The best part about the poster is that it came with an announcement that the first trailer for Captain America 2 will debut in two days!