Every year or three I go to Canada’s Wonderland, usually only with a group of friends on a special corporate day or a day when we know we’re going to spend half the time in the waterpark. Since there are bigger (and better) rides at Cedar Point, Wonderland’s lost quite a bit of its wonder. It doesn’t help that Halloween Haunt – as we discovered last night – sucks.

Each weekend night, Canada’s Wonderland transforms into a horror-filled nightmare. From mazes with terrifying creatures around every corner to thrill rides that’ll haunt your dreams, it’s everything you fear and can’t wait to experience. Not for anyone under 13.

What the official site doesn’t say is that if you find a promotional code and buy tickets for a specific day, it doesn’t matter what day you pick on the site’s ticket system – you’re stuck with whatever days that promo code is for. You won’t find out until waiting in line and not being able to get into the park without paying (an additional!) full price for replacement tickets (more than the regular online purchase price even).

That craziness, combined with the endless line of cars into the park, had us already at a late start last night – our first time trying out Halloween Haunt. Once we were in, the line for the Asylum maze was an hour so we spent that time in line for the Leviathan, the park’s flagship ride. It was awesome despite the boredom of waiting in the cold. In the following three hours we traveled around, being turned away with massive lineups at every Haunt scare event. Even the Top Gun ride – or whatever it’s called now – had a slow moving line of an hour.

The night runs only from 7-12, meaning on average if you skip breaks for food and know exactly where you’re going, you’ll realistically get to do 4-5 things. You’re paying a ton of money to essentially wait in long lines in the cold. It’s arguably not worth it from that alone. But it gets worse. 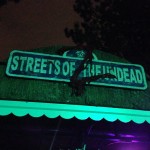 We bought and ate the obligatory funnel cake which was great, and then we waited in line for the Streets of the Undead event. It was terrible, saved partially only by the zombie actors outside interacting with people in the line. After all the waiting, we walked through a short second linear non-maze of actors dressed up as zombies. Some of them were pretty good, but the insane amount of security people inside of with depressed looks on their face ruined any sense of immersion. The lame venue didn’t help. That was the extent of the “Haunts” available to us since all of the other lines were simply too big, so we ended the night by waiting an insane amount of time in the cold again for the Leviathan.

Five hours, two rides and one boring walk in the cold.  At least the fountain and lamp lights looked good! The scariest part of the Halloween Haunt is how little the event allows you to do. I won’t even get into the smell of weed everywhere and how we couldn’t get out of the park. Our lineup of vehicles actually off-roaded over a muddy hill to get to the nearest road. Yes, that happened.