Not that he ever wasn’t awesome – I mean, I dressed up as Wesley Crusher as a kid for Halloween (more than once). I even did Data one year but that’s another story. Not unlike older Star Wars fans couldn’t agree on the Ewoks in Star Wars: Episode VI – Return of the Jedi, older Star Trek fans of the late ’80s and early ’90s weren’t exactly all positive about young Mr. Crusher.

For me, as one of the many children growing up with the show at the time, he was great. He totally worked as the character we connect connect to during the Enterprise’s deep space adventures.

Back to the present, Wheaton was signing at some New York convention recently when a fan approached him and pulled a sweater out of a bag, one that he bought at an auction, the very same sweater Wheaton wore as Wesley Crusher in 1987 – the first season of Star Trek: The Next Generation. He was blown away, and took some photos, even trying it on again some 26 years later: 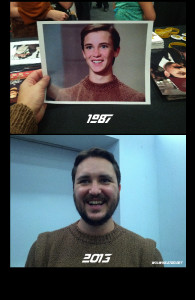